This weekend, I received my February box from Simple Loose Leaf. In it, I found a sample of a tea I’d actually had before. I had a cup of it (about half the sample) on Friday morning before going to mum’s, and had forgotten how much I enjoyed it. So when I had a quiet hour on Sunday, I decided to do a proper tasting in my guywan. 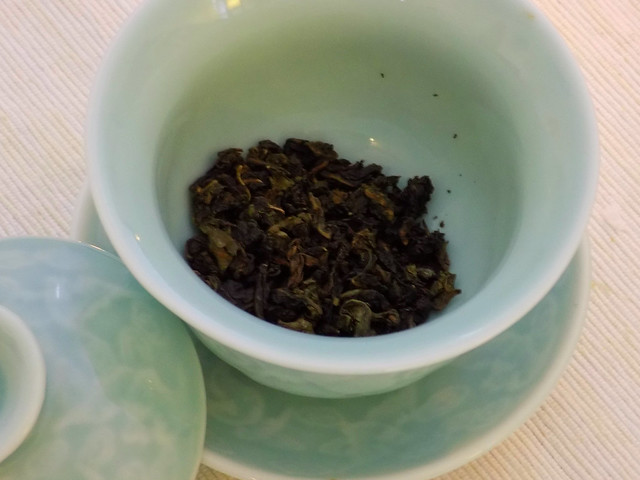 Jade Oolong is a lightly oxidized oolong with rolled leaves that is, sadly, unavailable from the Simple Loose Leaf shop right now. Hopefully they get it back in soon! I drink a lot of black tea in the winter because it feels rich, warming, and comforting, but I do love a good cup of Oolong. Jade Oolong is a classic floral Oolong with honey and grassy notes, and just a bit of tannin. It really shone in the guywan because the different steepings had distinct characteristic. It wasn’t until the third steeping that I really noticed a new wave of sweetness coming out. 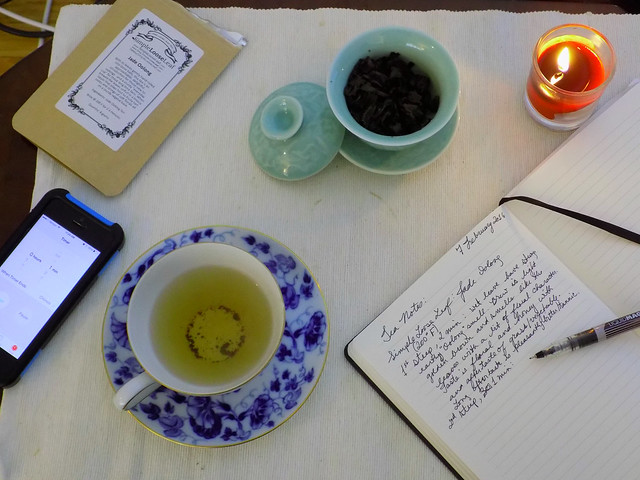 I was also excited to use one of the lovely holiday gifts Boyfriend got me: a new electric kettle! Our old kettle’s lid broke and we managed as best we could, but recently, it failed spectacularly enough that we had to retire it entirely. We had been using my office kettle for a while, but I awoke Christmas morning to find that Boyfriend had bought me a fancy new kettle. The new kettle not only will heat water to an exact temperature, but it will also hold the water at that temperature if you set it to. So I was able to set the kettle to 200 degrees Fahrenheit and keep it there while I did the various steepings. That way, I didn’t have to wait for the kettle to reheat in between.

All in all, Jade Oolong is a medium-bodied tea with a golden color and a floral-grassy aroma. The flavor brings in more honey notes, and the first steeping finished with a long tannic finish. The later steepings gradually lost the bitterness and tannin, and the third steeping brought in a lovely bright acidity and sweetness. I drank four steepings before I stopped taking notes, but I had a fifth a little later on. It is a truly lovely tea and I hope Simple Loose Leaf gets it back in stock soon!

Well, I’ve been a member of the Simple Loose Leaf monthly tea subscription for about nine months now. It doesn’t seem like that long, but I suppose that is because most of the tea rarely sits around for long in my cupboard. I’ve also ordered from them many times to have tea for the month at work.

I’ve found that pretty much every month, there is one tea in which I have no interest. But just one. Generally, I get 4-5 sample packs per month and at least three of them spark my interest. This month, they sent my two favorites, magnolia oolong and Earl Grey, along with a green tea I’m looking forward to trying.

I’ve also discovered that I sometimes enjoy a simply flavored, decaffeinated black tea in the evenings. One month, they sent a decaffeinated vanilla-flavored black tea. This month, it was blackberry-flavored. With a touch of sugar (and milk in the vanilla tea), they’re a lovely warming evening cuppa. I’ve even had that instead of a dessert some evenings. I may actually add a pack of the vanilla-flavored one to my order this month.

My system of using my monthly discount code to buy three types of tea has been working wonderfully. I’m spending much less on tea than I used to, and I always have a lovely variety at my desk. I get one green tea, one black tea, and one oolong tea to keep at work and then drink from the sample packs on the weekends.

Of course, like all relationships, not all days can be good. I’ve had one or two hiccups with Simple Loose Leaf. One possible complaint is that it can sometimes take a while for the tea to ship, but I attribute that to it being a small company and I would rather patronize a small company than always get my tea in two days. As far as specific incidents, once I had a monthly box fail to ship. After inquiring where my box was, they immediately realized their mistake and shipped it out post-haste. The other time, I received my order and realized it was the wrong one. After again apologizing, they immediately shipped out my proper order and I kept both orders. I actually got to try a couple of teas I would not have otherwise ordered, and I had a full-sized pack of tea to gift to a friend of mine on a whim. Even the problems have been overwhelmingly positive experiences, so I will forgive them their quirks.

All in all, I’m enjoying my Simple Loose Leaf subscription. I know I have been remiss at showing off the boxes as they come, so if any readers are interested in seeing each month’s box, I’d be happy to share. I plan on tasting the green tea I received this month with my guywan this weekend, so I will share that. Otherwise, know that I do recommend this service.

I mentioned earlier that I had joined the Simple Loose Leaf subscription tea service. To be completely honest, I chose them because they were one of the least expensive options, and I liked that it was a small business run out of the US. I considered some other services, but they either seemed focused on flavored teas, or else had excessive shipping times from being based overseas.

Before I joined, I emailed the company to express some concerns I had, primarily about the types of teas they choose for the box. Andrew assured me they are a company of tea-lovers who love the flavor of tea and are not overly concerned with making tea taste like something else. So I dove in.

I’ve received two boxes, one for March and one for April. Right away, the snow at the end of February put a cramp in their style, and I received a lovely email from Andrew explaining that the boxes would be delayed as weather prevented them from receiving some of their supplies. Sadly, I had hoped that my first box in March would be a birthday box, but it was not to be. That said, once I did receive the box, it was a pleasant gift.

The highlights of the March box were a gunpowder green tea, which came with a sample of spearmint tea to make a Moroccan mint with the recipe and packets of Turbinado sugar included, as well as a lovely Darjeeling. I’ve gotten more into Darjeeling teas with the spring, so that was a nice sample. It also included some herbal and flavored blends I haven’t tried yet.

April’s box had a Fujian black tea and a Taimu Mountain green tea that were a lot of fun to try and right up my alley. It also had some flavors I wasn’t so excited about. There was a Thai Chai that I still haven’t tried, but I like other chais, so maybe it will be good. The really out-there one was Nutty Mocha Mate, which I tried and did not like. I thought it kind of tasted like really weak coffee, which isn’t my preference. It also included a Jasmine Rooibos, which I haven’t tried because I don’t generally like Rooibos, but I like jasmine, so I may try it in the future.

I have to say, my current favorite part of the store is the 50% discount you get with a subscription! I got an order of 4 1-oz. bags of tea recently that I picked myself. It was three oolongs (Four Seasons oolong, Jade oolong, and Magnolia oolong) and their Four Horsemen black tea blend.

Four Seasons oolong is a really lovely, interesting tea. I was out of oolong but in the mood for it. It’s a variety of Tie Guan Yin oolong, which I’ve had before elsewhere and liked, but I noticed a particularly lovely milk oolong quality to it. It’s more subtle than the milk oolong I got from a local tea store and much more refreshing.

Four Horsemen blend is my go-to morning cup of black tea right now when I need a pick-me-up. It’s a blend of Assam, Darjeeling, Yunnan, and Keemun teas and you can pick out the qualities of each. In particular, it has the full body of an Assam, but without smothering the delicate quality of the Darjeeling.

Magnolia oolong is my new favorite tea right now. It’s a scented tea, like a jasmine green tea or a rose black, but the sweet scent of magnolias just go with oolong tea, and bring to mind the slowly-emerging spring. I highly recommend it for spring. I drink it at work when I can’t get outside, but I imagine it would be even more lovely sipped in the garden in the sun under a giant hat among the flowers.

So far I’m impressed with the quality of the teas and the service with Simple Loose Leaf and look forward to more from them. I’ve purchased the subscription myself, so I get nothing in return for this review.