I mentioned on Twitter a little bit ago that I was cancelling my subscription to Simple Loose Leaf in favor of a sub with less variety but more likely to provide teas I’m interested in trying. I signed up for Tomotcha earlier this month with the hope that I’d get my first tea in early June. Imagine my suprise when a flat little packet from Japan showed up in my letterbox earlier this week! Immediately after signing up, I was a little regretful, as the Tomotcha website leaves something to be desired. Other than an address confirmation from them, there is no way to sign into an account on their website and check on your subscription. Their Twitter feed hasn’t updated since last winter, and I was beginning to worry that maybe I signed up for a defunct service that was still charging people through automated web services. 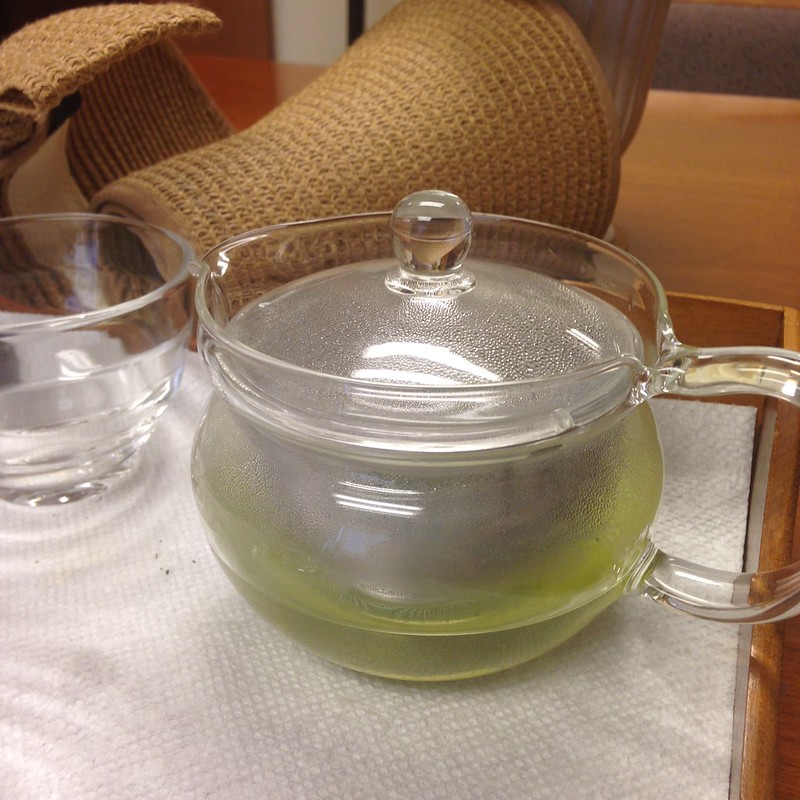 But that wasn’t the case! Yay! I got my tea and wanted to brew some immediately. Of course, it was a weekday evening, so that would have led to some difficulty falling asleep. There was also the fact that I realized a day or two earlier that my gaiwan are not suited to brewing Japanese green teas, which have smaller leaves than the Chinese ones the gaiwan excels at brewing. So I ordered a simple glass kyusu set and some cups for my office. They arrived yesterday, so this morning I was finally able to taste my new tea.

The tea that arrived was a Fukamushi Shincha, which is a deeply-steamed green tea from the first harvest of Sencha. The dry leaves look like most Japanese green teas I’ve encountered and has a strong vegetal, seaweedy aroma. The first steeping is meant to be at about 160-170F for a minute. The first thing you notice is the brilliant color, which reminds me of everything springy and growing. It smells very, very green. The taste is fresh and grassy. It’s very refreshing on a hot day. Subsequent steepings were done for 30 seconds and retain this freshness.

All in all, I’m pleased so far with this service and now I’m looking forward to months to come!