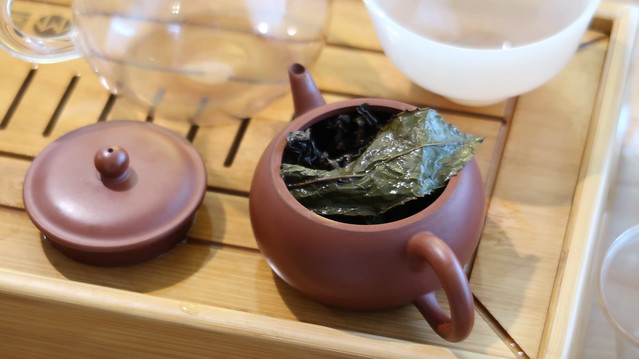 Marco at Steap’d has challenged us all to share our most memorable teas of 2019 and, thinking back, I can think of so many right off the top of my head (which I suppose is what makes them “memorable”). 2019 brought a lot of tea growth for me, so I think this merits a blog post rather than a series of Instagram posts. So here we go.

First of all, my most memorable tea moments of 2019 had nothing to do with specific teas. 2019 was the year that I really started to connect with the tea community at large, particularly through Instagram. I think having a long chunk of time at home on maternity leave helped, as did just feeling my own personal identity get dismantled and rebuilt through the ordeal of motherhood (ordeal in the “transformative event” sense, not in the “it’s so horrible” sense). 2019 was the year that I realized that, yes, I am a tea blogger. I may have pretended to be a beauty blogger in the past, but my true passion lies in what I pour into my face, not on it. And part of that self-definition came from meeting wonderful people, virtually and otherwise, like Marco and Nazanin and all the others I’ve met on social media. I hope that 2020 will bring more tea meetups, as well as some exciting tea adventures, some of which are already being planned.

Now, I want to say that these are not reviews or even tasting notes of the teas I’m mentioning. This is strictly Jenn’s story time about the teas that have stood out to her this year and why they might have felt more special. If I have a tasting or video featuring them, I will link it, but the primary purpose of this post is to be utter fluff and nostalgia. 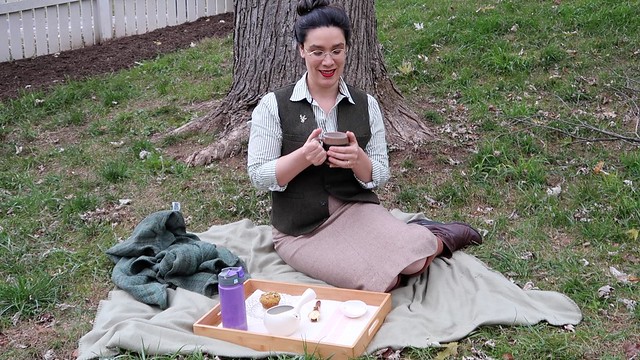 This one comes first because this was the tea that not only re-introduced me to hojicha, but also started me realizing that I love roasted teas. I think it was the day that Hojicha.co announced that they were selling their hojicha powder in 100g packets that I went to their site and bought one of everything. I started with the Gold Roast because it seemed more appropriate to the season, and it was good, but as the weather cooled down, I decided to crack open the dark roast. And, wow.

I featured this hojicha in my “Hobbits and Hojicha” video because it is the perfect tea for autumn. It reminds me of cozy blankets and fires in the fireplace, and I imagine I’m going to drink it throughout the winter as well. And Megan from Tea Musings has suggested that I try mixing the Dark Roast and the Gold Roast, which is something I’m excited to try as soon as I restock my Dark Roast. 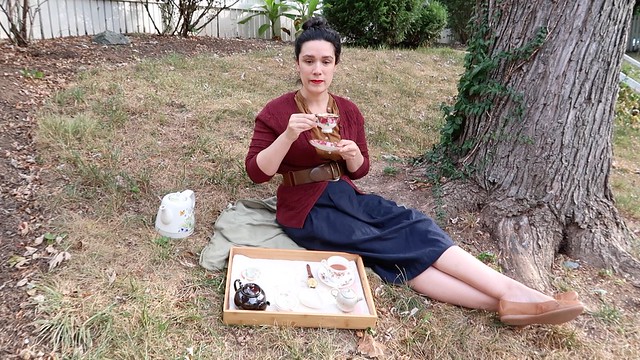 Not all memories are fond ones, and I think the face I made when I tasted a smoked Lapsang in this video should make the list. While this year was the year that I discovered I liked roasted teas, this was also the year that I confirmed that I dislike smoked teas. I did have a rather nice unsmoked Lapsang, which was akin to finding out I enjoy unoaked Chardonnay, but the real memorable taste is the utter regret I felt at brewing up a cup of the tarry stuff. Definitely not my cup of tea. 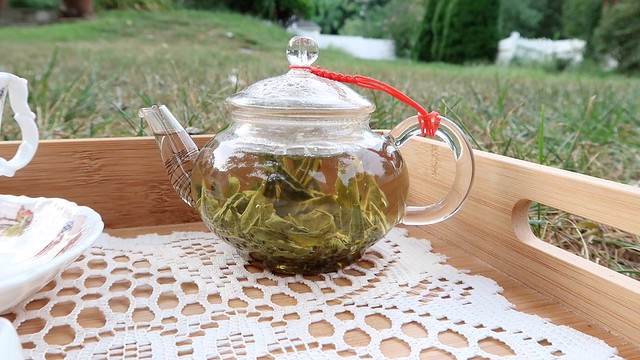 When I was chatting with Mark of Storm King Teas on Instagram, it came up that I was rather enjoying the Phugri Estate Darjeeling I got in a sampler from his company earlier this year. I featured this tea in my historical tea video about Anna Russell, Duchess of Bedford simply because I love its delicacy and complexity so much. I never drank very much Darjeeling before this year and both this tea and the regular Phugri Estate Darjeeling from Mark’s shop changed that for me. 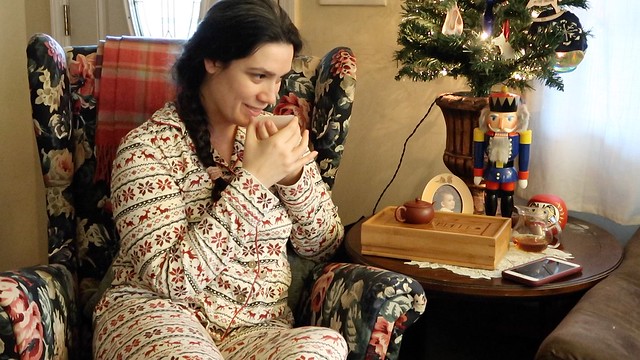 This was the year that I discovered yancha in earnest. While I’ve had yancha before, I hadn’t really explored it as a style before this year. And I definitely fell in love. I started with an order from Old Ways Tea, and initially opened the Shui Xians and Rou Gui I ordered because the notes on the Shui Jin Gui suggested that the roast was still a bit fresh and might do with a bit of a sit.

Well, in an Instagram live session, Marco mentioned that he had a Shui Jin Gui that tasted like orange, so I decided to make that my morning yancha session that day, and I was blown away. Yancha in general is a new favorite for me, and Shui Jin Gui is probably my second favorite yancha now. I get notes of allspice, orange peel, and burnt sugar, so I think it tastes like Christmas. In fact, I woke up on Christmas morning and had a session with this tea under the Christmas tree!

This tea is both unmistakably Da Hong Pao, and also unmistakably Taiwanese. It doesn’t have as much strong rock taste as the Chinese Da Hong Paos I’ve tried this year, but from the rinse, you get Da Hong Pao from the aroma. And it does take a little bit to get going in flavor because it’s rolled, but once it does, it’s definitely Da Hong Pao, but with the soft honey sweetness that I associate with Taiwanese oolongs. 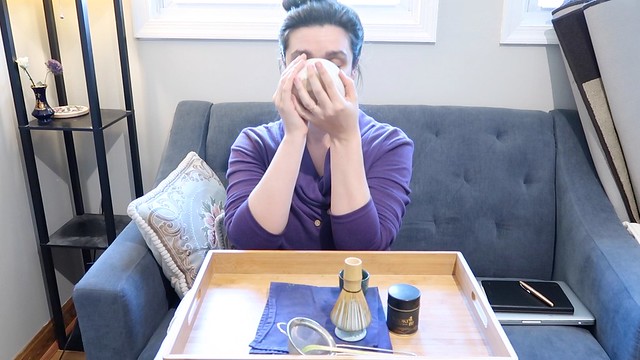 I severely reduced my matcha consumption this year, possibly because I just preferred the experience of brewing leaves. But this matcha from Naoki Matcha was enlightening. As I mentioned in my video tasting, it’s probably the nicest matcha I’ve tried to date. I was fortunate enough to get to taste it for free, after responding to a call for tasters in Naoki’s newsletter, but I was pleasantly surprised that it wasn’t actually as expensive as I thought it would be.

If you’re new to matcha, this is an easily-accessible one in the States and it’s a fantastic example of what good matcha tastes like. If you have the means, definitely splash out for it, rather than getting one of the swamp-water matchas on Amazon like I started with. 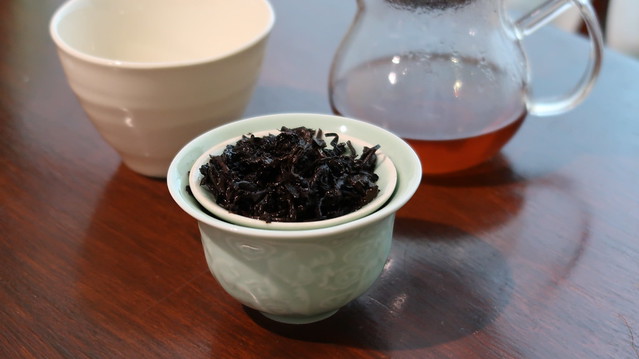 This was also the year that I decided to buckle down and learn a little something about puerh. And this ripe puerh sample from Yunnan Sourcing was both the beginning of my exploration and the beginning of my switch from reviewing teas to sharing tasting notes.

Before tasting this puerh, I hadn’t really ever had a puerh that really tasted sweet more than earthy, but this one showed me the variation in flavor in a good ripe puerh. I’ve spent the rest of the year exploring raw puerh mostly, but puerh in general is likely to be a theme of my 2020 if I find more like this. 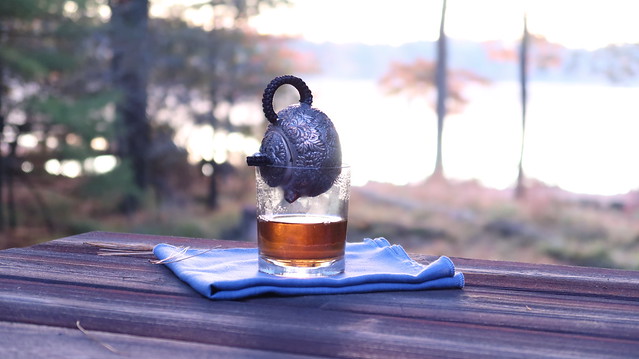 This isn’t really the specific tea, but more a technique that was suggested to me by Misha at Path of Cha. I bought this Shou Mei cake from TeaVivre rather on a whim when I was exploring teas that I could get on Amazon, and I was rather underwhelmed by it. So it got tucked in the back of my tea cabinet, and later packed in a box, and then unpacked and rediscovered when I moved this year. But it wasn’t until Misha suggested trying it in silver that I even opened it back up again.

And I was really surprised by the complexities of flavor. I even experimented with boiling it. It’s such an all-seasons tea, with a lot of interest. I think I’ll probably share this one the next time I have people over to taste teas. Plus, it’s an example of giving a “meh” tea a second chance.

So those are my 2019 most memorable teas. What are yours?

NB: Some of these teas were provided as gifts or in exchange for featuring in their own posts. All thoughts here are my own, and full disclosures will be with the tea’s individual posts.