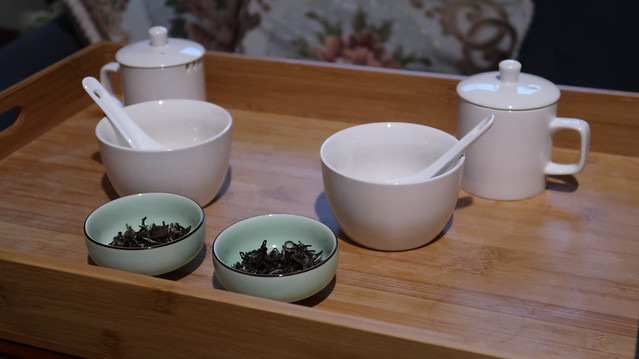 Today, I’m doing another comparative tasting, this time of two Dongfang Meiren (or “Eastern Beauty”) teas I got from two different sources. I got the first in my Floating Leaves Tea order that I mentioned last week, and the second I bought at Ching Ching Cha in Georgetown after Nazanin of Tea Thoughts mentioned that it was good. After trying them both separately, I thought it would be interesting to try them side-by-side. I’m continuing to use my cupping sets because it’s supposed to be a good way to evaluate teas quickly.

I used 3 grams of leaves for each 125-ml cupping set, with 95C water. I did warm the vessels before adding the dry leaves, but I didn’t rinse. I ended up steeping each three times. The dry leaf aroma on the Floating Leaves (FL) tea was of toast with honey, while the Ching Ching Cha (CCC) tea smelled of floral honey.

The first steeping was for two minutes. The FL wet leaves smelled of clover honey and yielded a medium-dark gold liquor with a light hay or alfalfa flavor and a light mouthfeel. The empty cup smelled of muguet. The CCC wet leaves smelled of buckwheat honey and yielded a lighter gold liquor with a honey aroma. It had a sweet fruity flavor and a honey-water mouthfeel. There was a lingering cereal sweetness and the empty cup smelled of hay and honey. 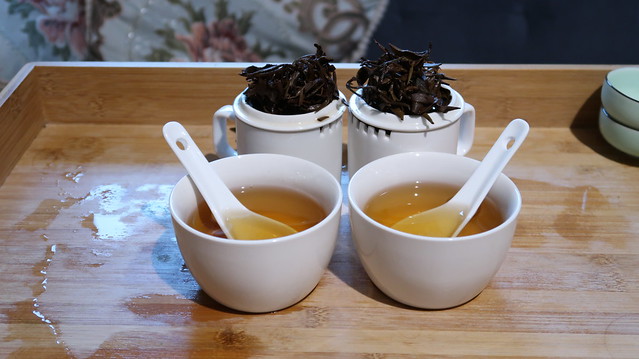 The second steeping was for two and a half minutes. The CCC wet leaves smelled of honey with a touch of smoke. The liquor aroma had a slight incense-smoke quality to it. The mouthfeel was thicker and juicier with a more pronounced straw flavor and less sweetness. There was a mild tannin. The empty cup smelled of honey and sandalwood. The FL wet leaves smelled of sweet grain. The mouthfeel was syrupy with floral and mild tannins. It tasted a bit like red raspberry leaf tea. The empty cup smelled faintly of caramel.

The third steeping was for three minutes. Both teas were obviously past their best flavors. The FL wet leaves had started to smell a bit like wet paper, and had a light honey sweetness but was obviously fading. The CCC had a sweet aroma, but fading, with a fruity honey sweetness. The spent leaves were similar in appearance, though the CCC leaves seemed a bit bigger.

NB: No affiliate links or promotional samples to disclose. To learn about contacting me for a collaboration, click here.